Colombia is an astounding country that will forever hold a place in my heart as the country where I learnt that humanity can be beautiful, warm and inspiring. I know, it has some of the worst human rights abuses in the world, but I still found such beauty everywhere I turned. I implore you to visit this land, with an open mind and a zest for exploration.

Colombia is the second most biodiverse country in the world, home to the Amazon, Pacific, Caribbean, jungle, mountains, desert and more. On a walk over a mountain in San Gil, with Loucho the dog, we got lost in fields of tobacco, coffee, tangerines, pineapples and much more. I was in heaven, and the dog was unimpressed with my lack of orienteering skills.

The beginning of a rainbow near some ancient thermal baths, an hour or so outside of Bogota 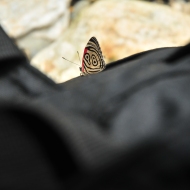 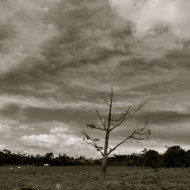 Over the Mountains: San Gil 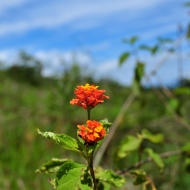 Over the Mountains: San Gil

Over the Mountain: San Gil 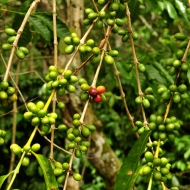 Orchids: Down on the Farm

The Birds are Coming Home to Roost: Leticia

People work very hard to earn a living in a country resplendent with enough to go around for all. Those at the top have been fighting very hard to maintain the structures that were installed during the dark days of colonialism. The rest work hard, create, cook, sew, toil the fields, and pace the streets, eking out a living from what the elites leave behind.  And the government wonders why the Revolutionary Armed Forces of Colombia persist. Go figure! 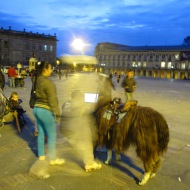 Plaza de Bolivar in Bogota, where you can have your photo taken with a lama. 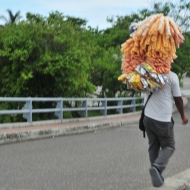 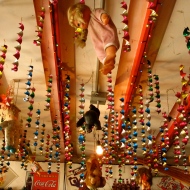 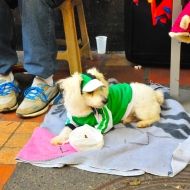 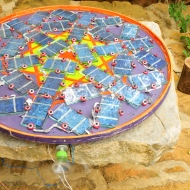 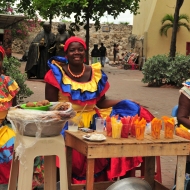 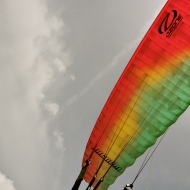 I saw some of the most breath taking sunsets in Colombia, in fact, the most artistic displays were often in the skies. There was always a thunderstorm brewing in the distance, and dramatic clouds filled with ellipsis.

On Baru Island, my faith in humanity was restored. 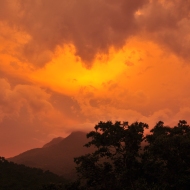 There’s always a story that lies behind a door, and sometimes it would be revealed, and at other times, left to the imagination.