It had been an eternity since the last adventure into my home city where I randomly select a tube station and uncover an unknown part of London. Yesterday I awoke filled with the joys of having control over my time again. I have recently joined the world of conventionality, no longer working from home and instead arising daily at 6:41am before setting off to a school in Harrow where I now teach. It is half term now, and the world is once again my oyster.

I decided to head to Blackhorse Road on the Victoria Line in E17, Zone 3, after a photography course along the Embankment. The sun was shining, nourishing the soul and shedding light on the city’s wealth of possibilities. Selfie sticks abound as tourists soaked in the London Eye, the Houses of Parliament and other well-known sites that have somehow lost a little of their majesty on having seen them so often. My mood on embarking the tube had shifted from the whistling and humming of nameless melodies in the morning to a sinking and emptiness that began to consume me. I was hungry, which is never a good thing as it usually entails a grumpiness and total lack of perspective until I’ve replenished my energy levels.

By the time I arrived at the station, I was already over the adventure. I started with a bad attitude, despite the warmth of the sun and panoply of colourful tumbling autumnal leaves. Seeing as the purpose of these trips was getting lost in an unknown area without the use of maps, technology and any prior research on my destination, I walked left out of the station, crossing a busy junction with no clue of my surroundings. A seemingly disused building with peeling paint interspersed with sleek lines of spray paint caught my eye. Intrigued at what this initially desolate area had to offer for entertainment, I looked at the various posters on the abandoned walls. They advertised events that were both alienating and intriguing. I am a music snob and rarely move out of my comfort zone. The first poster advertised a gig by a Who tribute band called Who’s Next for a tenner at The Plough ‘N’ Harrow in December. No thanks. The next was a gruesome looking ghoul with horns and saliva dripping from protruding fangs for a band called Motorheadache. They were performing at the same venue in November. I could think of nothing worse to be honest. The third was an image of Ozzy Osborne pulling what looked like an anguished face with bats around his head, at the same venue for Halloween. Urgh. The final was a disturbing picture of an x-ray photo of someone who looked like they were having a really bad hair day and were in need of some serious Botox. The gig was not really even a gig, but a chance to meet ex Iron Maiden drummers and buy Iron Maiden memorabilia. Um, not today thank you. However, now as I write this and my mood is comparatively elevated, the chance to have an experience so inconsonant with my own sounds hugely appealing! Anyway, my musical snobbery confirmed, I moved on, crossing the road onto Blackhorse Lane.

The need to eat was all-pervasive so I walked past a couple of shops and entered a café. It was an unhealthy green, filled with grey people. The menu offered heart attacks and black pudding so I ordered a veggie burger with no chips and took a seat by the window. As I awaited my food I decided to play around with my camera, exploring it with a whole new understanding after the course I’d taken in the morning. The woman behind the till, from Turkey perhaps, was calling everyone darling, and this curled my mouth upwards temporarily. I aimed my camera at her and the industrial coffee machine she was working. I am still nervous taking pictures of people, especially without their permission. Eventually she came over and asked what I was doing, and what I was taking pictures of. She didn’t call me darling. I filled in the gaps and decided she was uncomfortable as perhaps she was working illegally and didn’t want to be shot at the scene of the crime. 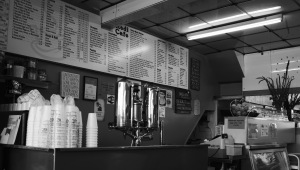 A menu of heart attacks

After a nutrient free nondescript burger for £2.20, I left. Passing Krishna News I spotted some anti-Orientalist cards on display. They were greetings cards featuring images only of brown people with the perfunctory swirling fonts and messages. This was genius, and something I’d never seen before. Blackhorse Road was far more progressive than I’d anticipated. I continued along the road feeling slightly less depressed.

There was truly nothing worth me describing in any poetic detail. The terraced houses of the 1830s were short and stumpy. Some were well kept; some had their slim gardens filled with old sofas, broken glass and debris; some had Arabic above the doors; some had vases of fake dusty flowers in the windows. I struggled to see the beauty as my mood kept plummeting further and further. What was wrong with me? I had awoken filled with optimism and now felt like crying.

Passing dereliction and abandonment, warehouses and a salient lack of life, I came off the main road, hoping to find somewhere green to relax and find myself again. The last four posts in this series Uncover London had led me to locks, beaches, streams and obelisks. Trudging along, I sought happiness in my surroundings and failed. A man stood outside his flat smoking next to an off license called Jug and Bottle. Everywhere seemed so lonely and uninspiring and unfriendly.

No matter which direction I walked, I couldn’t find anywhere to sit in the sun and gain my composure. A beautiful sign on an elaborate metal design couldn’t even lift my spirits. It said the following:

Lo when we made the tangled wood.

In haste and hurry to be there.

For all that they be fashioned fair.

But looking up at last we see

The glimmer of the open light.

From o’er the place where we would be:

Then grow the very brambles bright.

The words meant nothing to me as I wallowed in a self-created muddy mire. The only signs I absorbed all said NO: No ball games; Sod the dog, beware of the kids; No bag waste; Danger of death, no no no no no. Eventually it dawned on me that I would find no beauty in Blackhorse Road for I was only seeing what I wanted to see, that which was confirming the declivity of my mood. I stopped fighting it. I stopped trying to be something that I wasn’t in that moment. I think in life we are encouraged to value happiness over contemplative sadness without perhaps appreciating that without one, there is no understanding of the other. This is hardly ground breaking philosophy, I know but sometimes we forget the simplest of truths. 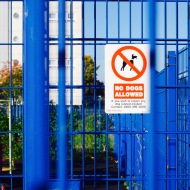 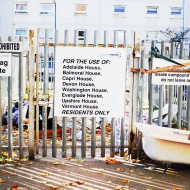 Content in remembering that today’s temporary state of melancholy was necessary in that it was an informative emotion reminding me of how far I’d come from the years of depression I’d endured in the past, and that the gloom illuminated the light, I realised that Blackhorse Lane was perfect in every way. I think I’d been so eager to replicate past explorations for this series, had sought the embrace of nature which was nowhere to be found, and had fought those moments’ reality to my detriment. Giving in, my environment no longer felt like a reflection of myself. It was merely a projection, and one I had complete control over. Feeling a sense of accomplishment, I decided to go home. I hadn’t failed. I hadn’t wasted an opportunity. I had been reminded that it was healthy to embrace all our emotions, and not place them in some kind of hierarchy, as they all worked in a consummate symbiosis.