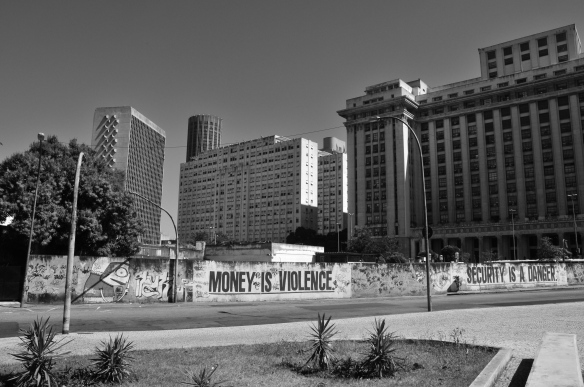 It has taken me a while to come to terms with being robbed. I can’t yet say I have forgiven those that stole most of my material possessions. I also can’t say that I have entirely forgotten about what was taken. In fact, last night I was thinking of my diary and if the pink marbled book filled with my deeply personal thoughts and feelings, was stained and stinking in a rubbish dump somewhere in San Francisco. However, rather than this post being some lament over all things lost, it concerns poverty, begging and crime as symptomatic of the international economic system.

To cut a long story short, I parked our hired vehicle, which we’d nicknamed The Beast, in one of the poorest parts of San Francisco: the Tenderloin. My friends and I were on our way to check into a fancy hotel as a treat for my birthday, so we had all our belongings in the back, fully exposed. Our intuitions said don’t park here. Even the parking metre, which was bust, was saying don’t park here. Opposite, sat on the pavement, was a man called Alan. Perhaps even Alan was silently saying don’t park here! It’s hard to gauge whether Alan was homeless, but suffice to say, politeness aside, seeing as this is my blog and I can say what I like, he looked unkempt to say the least. My friends and I chatted with him, and as we got our things together, I gave him my leftover food for lunch. Who knows what he thought of us. Straight-up middle class idiots, with an expensive car parking in the Tenderloin, handing out organic salad; or, as an opportunity. Regardless, he was nowhere in sight when we returned to find the back window of The Beast smashed into pieces and all of my stuff gone. Luckily, my friend’s suitcases were of the hard variety, and couldn’t be squeezed out of the gaping hole.

Passport, camera, money, new clothes, my cosmetic bag filled with new products, essential oils, and worst of all, my diary, were all being scattered, sold and thrown away somewhere nearby. The monetary total of things stolen was in the thousands. However, the pain in the backside and feelings of violation that ensued, were priceless.

As the title of my blog An Activist Abroad suggests, and the musings I have shared with you, I generally always support the underdog. I am deeply uncomfortable with the fact that according to UNICEF, around 22,000 children die a day from poverty-related causes. I am perturbed by the extent of the world’s unnecessary suffering, starvation, violence, oppression, pain, and deprivation resulting from what I view as the following in their explanation. I do believe that some people are materially impoverished due to cultural and lifestyle choices, such as nomadic peoples, wandering aesthetics like the Sadhus of India and monks of Thailand. If someone has the autonomy to choose to live with the bare minimum, then that is entirely different to the millions who are unable to live a life of dignity born from the political decisions made by the world’s elites.

Thomas Pogge, a German philosopher, echoes my views, albeit in a much more succinct manner. He has compared citizens who support today’s international system in which millions languish in abject poverty, to passive Germans during the Nazi era or to those who turned a blind eye to apartheid in South Africa. We know that there is great injustice in the world, and yet we somehow morally explain ourselves out of the equation. According to Pogge:

We nevertheless uphold an economic system in this world that, totally needlessly, keeps one-quarter of the world’s population in abject poverty, where the combined income that they have is just three-quarters of 1 percent of global household income—an incredibly small amount.

The world is now rich enough in aggregate to do away with poverty in a way that we rich guys would barely feel. It’s a crime to let it continue. One-third of all deaths in the world are premature from poverty-related causes.

This is not a minor thing. This is just a very, very massive problem or crime against humanity.[1]

There are people literally starving every second of every day, and yet a large amount of us does nothing to challenge this gross systemic violation of people’s human rights. Like he said, the international system as is, is a crime against humanity.

What on earth has that got to do with getting robbed?

Why am I rambling on about poverty and our responsibilities to bring about its cessation? Well, I guess it is because the underdog robbed me, the very people I aim to dedicate the rest of my life towards fighting with and for. I felt like I’d been slapped in the face by the impoverished who saw my stuff as a means to their next meal, or next drink or drug fix. Poverty, combined with opportunism, and according to the local police, an entitled attitude combined with an elaborate network of illegal syndicates, and my material wealth clashed. I was left feeling angry, sad, disappointed, violated and confused.

Some attitudes towards the have-nots during my trip

I started my year staying with my close friend and her family in the wealthy suburbs of Mexico City. I struggled daily with the guilt I felt towards their cleaner, who scrubbed away five days a week only to go home and have to do the same for her family. The wages for such menial labour are low, and although my friends pay more than is considered normal, life must still be a struggle for those at the bottom of the pyramid. In fact, she was eventually fired, as she had been continuously stealing money and things from the house.

Her Mexican husband’s attitude towards the cleaners, maids and labourers of Mexico was that with a little effort, if you save a bit of that measly wage, you can eventually invest in a food cart, for example, make more money, and perhaps set up a restaurant. It’s about making an effort, and pushing yourself to achieve by pulling yourself out of an economically impoverished situation.  Basically, life deals a tough card to a lot of people, but to some extent, we are all responsible for our destinies, and can escape poverty if we try.

My family in The House of Hearts in Medellin, Colombia were of the impression that giving money to beggars was totally counter-productive. Diony was a strong believer in the charity of the church as well as the range of services, organisations, projects, rehabilitation centres and assistance available in the city for the poor and downtrodden. She felt that handing money to someone who would very likely spend it on alcohol or drugs was contributing to the problem.

Two professors from somewhere deep in the Amazon told me that there is also a kind of existential approach to many poor Colombians’ philosophical outlook on life. Rather than plan and think ahead, and save, people live day-to-day, moment-to-moment, and this is one of the reasons they remain poor. The female professor’s academic background was similar to mine, in International Development, thus her understanding of poverty was nuanced and interrogative.

A woman I met in the early hours of the morning in Fortaleza bus station, northern Brasil, told me that most of the poor people in her somewhat dangerous city, were opportunists and lazy. Rather than do a day’s work, it is easier to rob an iPhone here or there, snatch someone’s wallet, or relinquish someone’s home of their possessions. This infuriated her, as she too comes from a poor socio-economic background, but she would rather work an honest job, than beg and steal.

Stop focusing on the symptoms

We could debate this for hours. I am not even sure that I have made myself all that clear. I guess what I am trying to work out, is if there were a more just world, with income distribution more evenly spread, and people’s basic rights to a life of dignity were realised, if the incidence of crime would be so high.  I think there will always be opportunism and free riders, but that doesn’t just fit the description of the poor. Many, if not most, trans-national corporations exploit those at the bottom line as they have the opportunity to do so. Some of the greatest thieves in our contemporary era are amongst the global elites, from Karachi to Kenya, New York to Nigeria. Some of the grossest corruption and daylight robbery I have seen has been during my trip through the Americas, where corruption is endemic and the social schism resulting from the gaping chasm between the rich and poor is grotesque. So it is no wonder that those struggling to eek out a living feel some sense of entitlement from those robbing them of a decent living on a daily basis.

Until we address the root causes of poverty, and accept our complicity in a system which is failing to benefit the masses, the probability of being stripped of my possessions again, remains high. 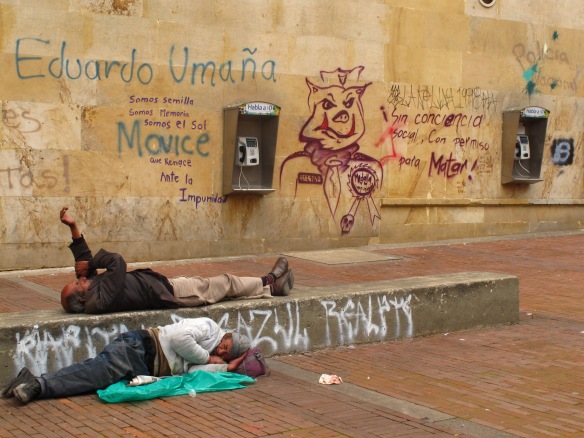 [1] To watch or read the entire January 2012 interview between Pogge and Kennedy, here is the link http://www.policyinnovations.org/ideas/audio/data/000627

I’d love to know what you think, so please share your thoughts in the comments section below.

4 thoughts on “What came first, the beggar or the thief?”