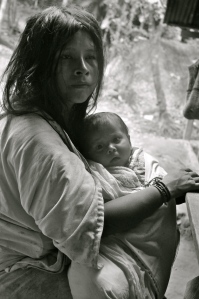 Members of the Kogi tribe.

A great distance has been traversed in my last few weeks in Colombia, both mentally and physically. I write this entry from heaven. And no, I haven’t died, or reached some kind of blissful living state, at least not just yet. I am in the department of Santander, in a cottage in the woods near a little town called San Gil. Justin and Andrea have popped into town and I am left with a panoramic view of lush, vibrant vegetation, sleeping dogs, a cat and a bunny and this blank screen. For some reason writing today feels a bit daunting, a bit like an essay, as my thoughts are slightly unstructured, so bear with me.

After dislodging myself from the simplicity of a sedentary life on Baru Island, which consisted of arising at the crack of dawn, writing my morning pages, falling into the clear blue sea, eating, studying Spanish, sleeping, swimming some more, eating and then sleeping, I found myself in my first hostel in months in the historical centre of Cartagena. It was stiflingly hot, with little chance of respite as the surrounding beaches were pretty unpleasant and dirty. Sticking to my plans of no plans, I had made no booking at Makako Hostel, and hadn’t realised that a newly acquired friend’s suggestion scribbled in my little black book was resident to dorms only. But I’m 34, I exclaimed, in Spanish, sweating. This is not how I roll. Left with no desire to pick up my backpack laden with boulders and traipse around unknown streets, I gave in, and moved into my new room with four other beds. I hadn’t slept in a dorm since Amsterdam, and even that hadn’t been out of choice. I was there years ago, armed with a skateboard, a small bag, no friends and no plans and was being pursued by a man with bad intentions in the dark. I dove into the dorm for safety, but not out of a desire to share my sleep with so many people.

I decided to sit in the communal area, which consisted of a large lounge with a big TV, occasional air-conditioning and a selection of pulsating fans that pushed around hot air. I plonked myself down on a sofa and immediately fell into conversation with a beautiful girl from England. It was the first English voice I had heard since Mexico and the perfunctory traveller type conversations began. Where have you been? How long have you been here? Have you done the Inca trail? Now, as I had only really been spending time with Colombians, it was initially a relief to be able to express myself in my own language, but I swiftly found myself missing speaking Spanish, and vowed to myself that these kinds of conversations would be kept to a minimum. After all, I was not a hedonistic 20 year-old backpacker any more, bumming around from hammock to hammock. No, I was more mature and here for an authentic experience.

The historical centre of Cartagena

I stayed in Cartagena for a few days, feeling more and more unhappy day by day. I was moved from bed to bed, as I had made no booking, and hardly slept at all, which multiplied my recent turn for the worse ten-fold. The mundane conversations continued, and an inner battle was raging in my tired mind. What was it that I was so upset about? I think there were an array of things all happening at the same time, some of which I will adumbrate. There are only so many times you can hear how Machu Picchu was awesome, yet overrun with tourists; and how shocked people were at how incredible Bolivia was; and how much fun Buenos Aires was before it sounds like a remix of the same tune, yet with slightly different breaks. I was becoming incrementally weary of my own voice too and couldn’t be bothered to narrate my life’s plans, or paucity of, to the next tourist that I shared a dorm with. I’m looking for somewhere I want to live, work and settle. Boring. What was worse was that this was not Colombia. This was a spurious and superficial experience. I missed my family in Medellin, and the boys on Baru.

Furthermore, I found Cartagena to be an intensely oxymoronic city, laden with gross contradictions.  I explored very little of it, as I was rendered lazy and incapable of moving most days due to the smothering heat, but what I did see in the old city, and the stinking poor peripheries on the bus from Baru, actually left me in an even deeper contemplative and agitated disposition. The Spanish were responsible for the design and command of some exquisite buildings, but who built them, and what did these structures represent? Slaves and the beginning of the end of the civilisations that had been flourishing on this rich land for centuries. So yes, the architecture is aesthetically astounding but the blood, sweat, hatred and death still pulsated through those narrow streets, dripping down the walls filling my nostrils and skin with a profound sadness and intense guilt.

Step a few minutes outside of the historical centre and things start looking a lot more dilapidated and rough around the edges.

Why the guilt, I hear close friends ask. On the bus ride into the city, I saw dirt, rubbish, flies and scum filling rivers, streets and any available space. This is where the poor lived. And many of them were from ex-slave families. People picked through trash, searching for scraps they could recycle for money, and small dwellings slammed into piles of festering refuse, with a stench I could only imagine from the enclosed walls of the packed bus. The old colonial centre, however, was almost frighteningly clean. And who were frequenting these expensive hotels, overpriced boutiques and cupcake bakeries? More to the point, who was serving those of us wealthy enough to afford such fineries? It was those living in trash city, quietly shut away from the beauty of the Spanish remains. And so, yes slavery was eventually abolished, and yes things have changed. But, things are still the same, and for this my heart wept, once more. I later found out on day three of the trek to La Cuidad Perdida, that Colombia ranks as second on the Gini Co-Efficient Index, one behind Haiti. This makes it almost the world’s most unequal country in terms of income distribution or consumption expenditure. Cartagena is the country’s most unequal city.

I was also crumbling under people’s propensity to share their negativity with me, without even acknowledging that they were doing so. For instance, I mentioned that I was taking a boat down the Amazon River into Brasil. The response was oh, I’ve heard it’s a bit boring and the food’s no good. For a start, how on earth travelling down the Amazon could possibly be boring was a concept that hadn’t even entered my mind. And whether the food was or was not good or not was also of no interest to me. I had had no impressions or ideas of what the trip would be like, and now it is tainted by an innocent recollection of second-hand subjectivity. This happened repeatedly, on differing themes, slowly shoving me into a corner in which I was nervous to hear anyone’s opinions or comments. I felt like printing a tee-shirt saying, If you have nothing positive to say, then don’t say it at all. The irony of that being, it would be a deeply negative slogan!

Exhausted, I left on a bus for Santa Marta, which was four hours away, and hopefully a little cooler and less oppressive. Arriving in the nearby fishing town of Taganga, my heart dropped a little further. It was another national holiday, and the rugged streets, unpaved and unable to cope with the influx of trekkers, divers, travellers, hippies and people searching for a party, were filled. Sound clashes of almost blown-out sound systems punctured any semblance of peace that may be dwindling, and I wanted to run once more. Again, I questioned whether a little research into some of the suggestions I had received might have been warranted. A friend from Australia that I had escaped Cartagena with felt the same. We’d leave tomorrow, at the crack of dawn and get out of this godforsaken place.

Later, after having calmed down somewhat from our extreme reactions of repulsion to Taganga, whilst dipping about in the hostel’s pool, a girl managed to encourage me within a sentence or two to do the five-day trek to the lost city. Perhaps some time out of so-called civilisation, enveloped by the reassuring embrace of nature may be the perfect antidote to this accumulation of negativity that was unravelling inside me. And that was it, I booked the next day and whiled away my time swimming in the town’s next bay, eating fresh fish and feeling calmer in the knowledge I was going to be deep in the Sierre Nevada de Santa Marta. A self-induced weight instantly fell from my shoulders.

Rather than recite every detail of the mind-blowing trek, for now I will extract one aspect of it, to conclude and draw together the different anxieties that propelled me to study injustice, as well as the inner battles I had been fighting over my emotions towards a supposedly less authentic blip in my travels. On day two, as the remnants of a rainbow faded into the distance opposite a burnt orange and pink sunset, my trekking crew and I crammed around a table as close as we could to listen to a chief from the Kogi tribe. The sound of the orchestra of bugs, frogs, birds and insects cushioned by the fast-flowing river muffled his voice, and so we all huddled in even closer, so as not to miss a word. At first, everyone else was very slow to ask any questions. I had been procuring a massive list of them since hearing at the start that we’d be able to talk to someone from one of the four indigenous tribes in the region. I started by asking him what he thought of other civilisations, and he relayed a short story. Don’t expect to be flabbergasted by what he had to say, as it is nothing that we don’t already know. Authenticity and timing was what impacted me the most.

We think of you as our little brothers, he said. The indigenous people of the Sierra Nevada find it very difficult to understand why we don’t live in harmony with our environment and have the utmost respect for our planet, which after all, provides us with life. Our interaction with the earth is completely alien to them. They live in a state of respect and equilibrium with nature, taking only what is needed, and no more. Our expropriation of the world’s resources is completely the opposite, and is short sighted and entirely discordant with common sense. We are bringing about disaster after disaster, and eventually our collective demise. Therefore, they see us as their little brothers, as we have a great deal to learn from them. Concepts of progress, authority, and knowledge were all tipped on their heads.

So, what advice do you have for us, your little brothers?

‘Start with your own lives, for this is what you can control.’

This is the same piece of advice I have been receiving in London, Mexico, California and Colombia. And everything started to click into place. I had recently reverted to thinking negatively, descending deeper and deeper into a spiral of sadness. I had also felt overwhelmed by the inequality and poverty in Cartagena, which had made me angry and frustrated. It seemed like one of the major metaphysical questions I had set myself was being answered. Start with yourself, and the rest will follow. 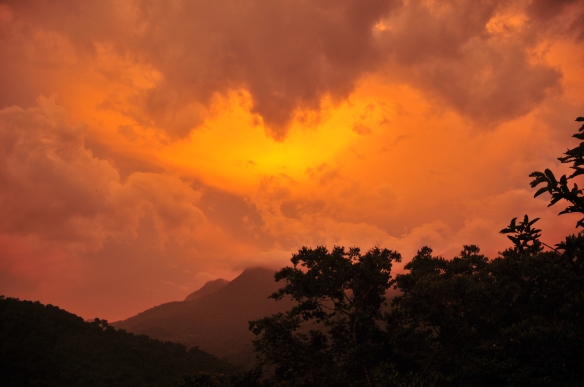 Sunset on day one of the trek